24 May | Language and Testing
Back to all articles

Arabglish, also known as “Arabizi”, Arabish (Arabic plus English) or Arabglizi is the informal Arabic chat alphabet which became a popular phenomenon among younger generations with the introduction of technology between the mid-1990s to early 2000s. It is generally mixed with English and particularly popular in informal settings: when communicating with friends and family via text messaging or chatting and on social media platforms.

This widespread language variant is basically Arabic text written in its transliterated form using Latin characters and numbers that represent certain alphabets in Arabic, i.e. writing Arabic in English. The Roman numerals are used to symbolize the Arabic letters which don’t exist, or rather, the ones that have no phonetic equivalent in English. For e.g., the Arabic letter “ح” (Haa) can’t be accurately represented with Latin characters and it is, therefore, represented by the number “7”. Do you see the resemblance between the shape of the letter ح and the number 7? Pretty cool, eh!

Since there are different dialects of the Arabic language, the Arabizi writing system is not standardized and there is no one “right” way to write it.  Therefore, some variation exists in the way Arabs write it because it is linked to the particular dialect they speak.

Let’s have a quick peek at the Arabizi alphabet: 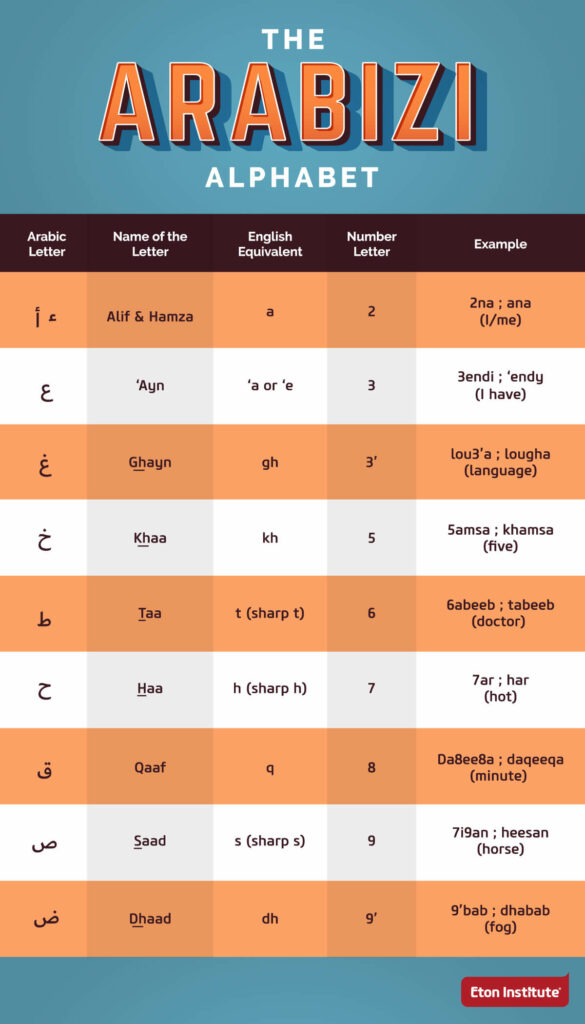 Good morning! I’m doing well .. What are your plans for the weekend?

I may go to the cinema today and then I’ll go shopping later. What about you?

I don’t have any plans.. but I’m going to the mall tomorrow.. Let’s meet tomorrow!

Interested in learning Arabic? Choose from a range of Arabic language courses to suit you.